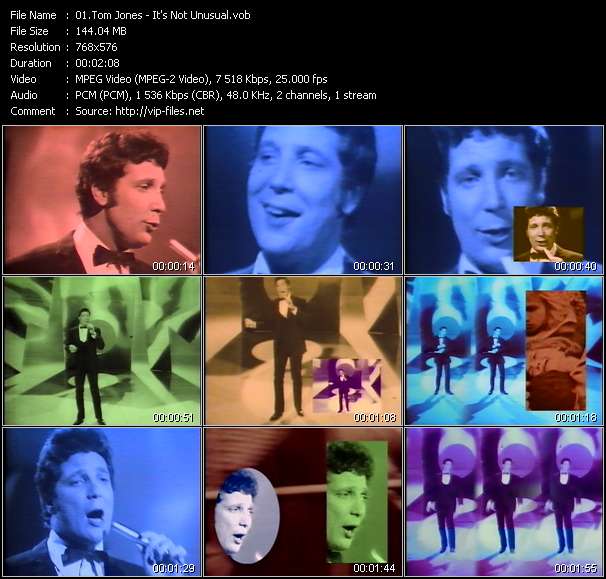 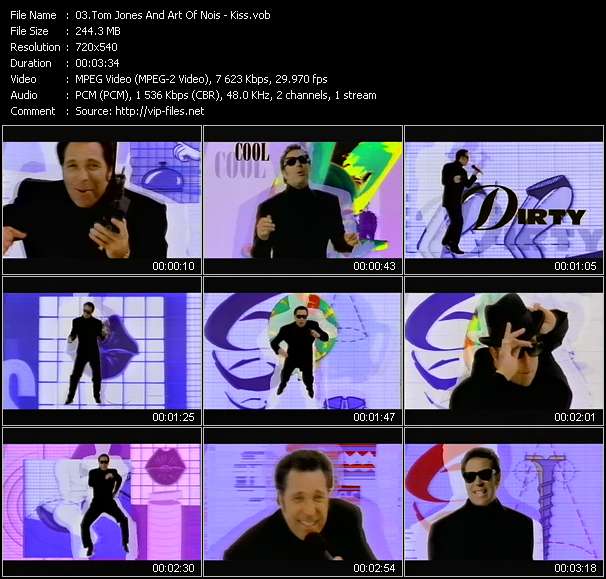 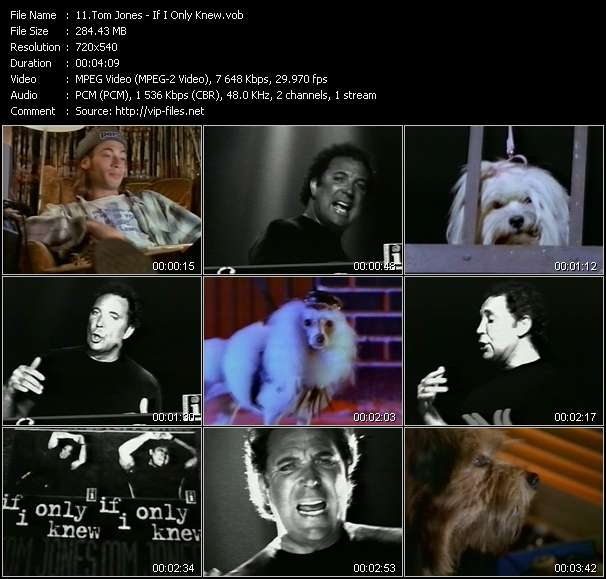 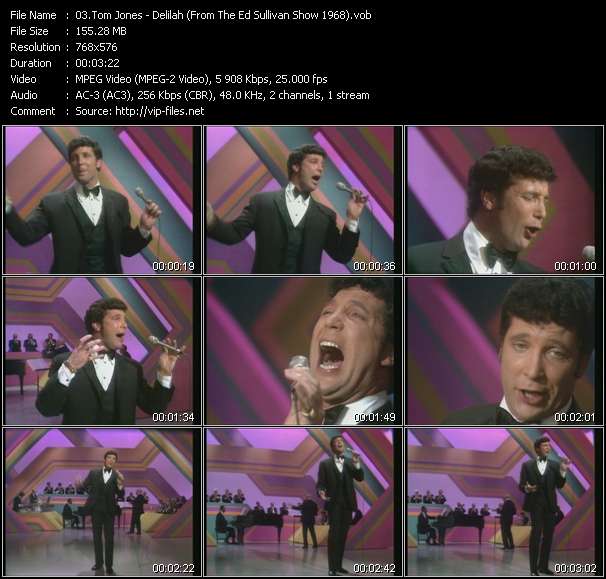 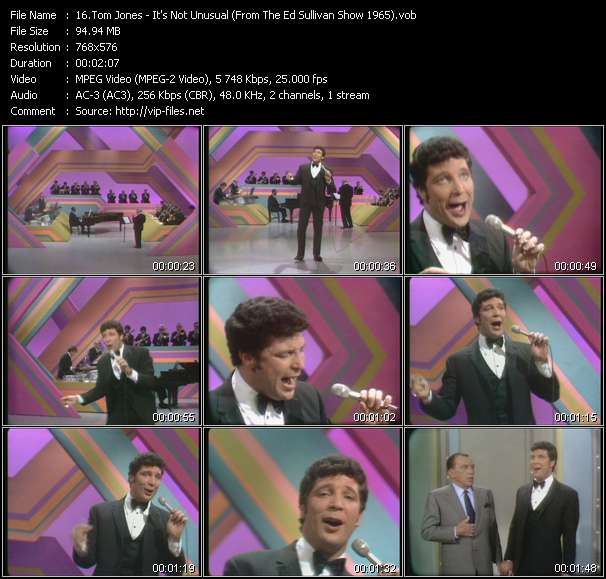 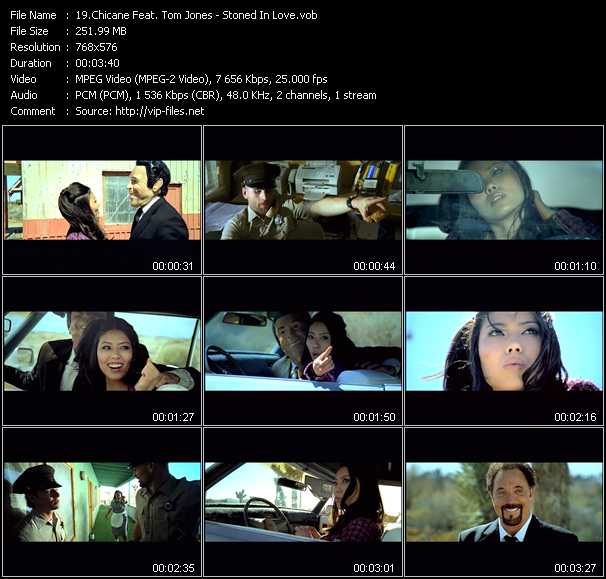 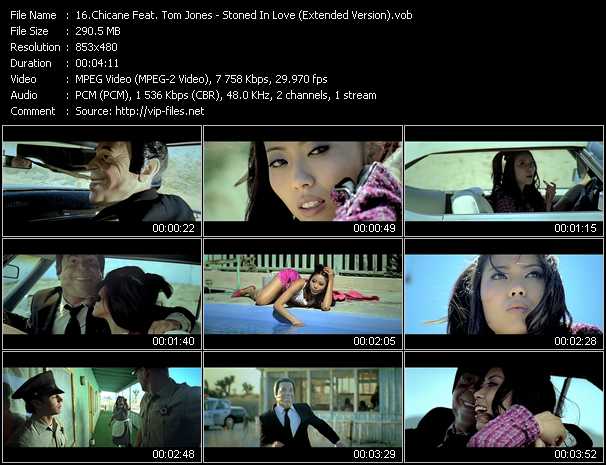 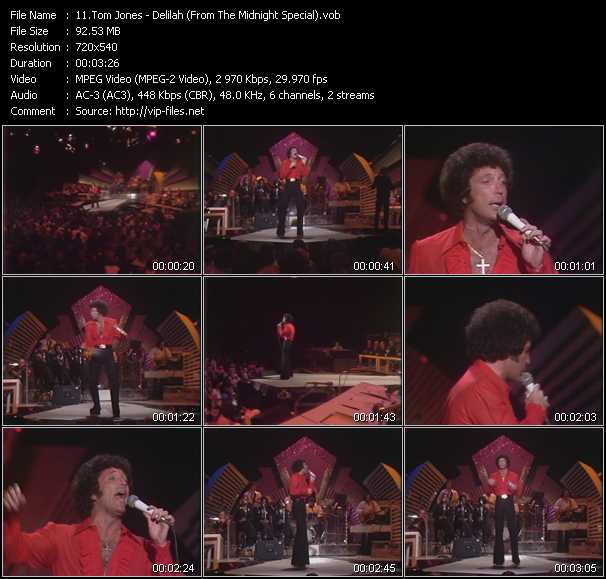 Tom Jones music video If I Only Knew

DVD: Burt Sugarman's The Midnight Special. Live On Stage In 1976

Tom Jones And The Cardigans music video Burning Down The House

Tom Jones And The Cardigans music video Burning Down The House

Tom Jones became one of the most popular vocalists to emerge from the British Invasion. Since the mid-'60s, Jones has sung nearly every form of popular music ( pop, rock, show tunes, country, dance, and techno, he's sung it all. His actual style ) a full-throated, robust baritone that had little regard for nuance and subtlety -- never changed, he just sang over different backing tracks. On-stage, Jones played up his sexual appeal; it didn't matter whether he was in an unbuttoned shirt or a tuxedo, he always radiated a raw sexuality which earned him a large following of devoted female fans who frequently threw underwear on-stage. Jones' following never diminished over the decades; he was able to exploit trends, earning new fans while retaining his core following.Born Thomas John Woodward, Jones began singing professionally in 1963, performing as Tommy Scott with the Senators, a Welsh beat group. In 1964, he recorded a handful of solo tracks with record producer Joe Meek and shopped them to various record companies to little success. Later in the year, Decca producer Peter Sullivan discovered Tommy Scott performing in a club and directed him to manager Phil Solomon. It was a short-lived partnership and the singer soon moved back to Wales, where he continued to sing in local clubs. At one of the shows, he gained the attention of former Viscounts singer Gordon Mills, who had become an artist manager. Mills signed Scott, renamed him Tom Jones, and helped him record his first single for Decca, "Chills and Fever," which was released in late 1964. "Chills and Fever" didn't chart but "It's Not Unusual," released in early 1965, became a number one hit in the U.K. and a Top Ten hit in the U.S. The heavily orchestrated, over the top pop arrangements perfectly meshed with Jones' swinging, sexy image, guaranteeing him press coverage, which translated into a series of hits, including "Once Upon a Time," "Little Lonely One," and "With These Hands." During 1965, Mills also secured a number of film themes for Jones to record, including the Top Ten hit "What's New Pussycat?" (June 1965) and "Thunderball" (December 1965).Jones' popularity began to slip somewhat by the middle of 1966, causing Mills to redesign the singer's image into a more respectable, mature, tuxedoed crooner. Jones also began to sing material that appealed to a broad audience, like the country songs "Green, Green Grass of Home" and "Detroit City." The strategy worked, as he returned to the top of the charts in the U.K. and began hitting the Top 40 again in the U.S. For the remainder of the '60s, he scored a consistent string of hits in both Britain and America. At the end of the decade, Jones relocated to America, where he hosted the television variety program This Is Tom Jones. Running between 1969 and 1971, the show was a success and laid the groundwork for the singer's move to Las Vegas in the early '70s. Once he moved to Vegas, Jones began recording less, choosing to concentrate on his lucrative club performances. After Gordon Mills died in the late '70s, Jones' son, Mark Woodward, became the singer's manager. The change in management prompted Jones to begin recording again. This time, he concentrated on the country market, releasing a series of slick Nashville-styled country-pop albums in the early '80s that earned him a handful of hits. Jones' next image makeover came in 1988, when he sang Prince's "Kiss" with the electronic dance outfit the Art of Noise. The single became a Top Ten hit in the U.K. and reached the American Top 40, which led to a successful concert tour and a part in a recording of Dylan Thomas' voice play, Under Milk Wood. The singer then returned to the club circuit, where he stayed for several years. In 1993, Jones performed at the Glastonbury Festival in England, where he won an enthusiastic response from the young crowd. Soon, he was on the comeback trail again, releasing the alternative dance-pop album The Lead and How to Swing It in the fall of 1994; the record was a moderate hit, gaining some play in dance clubs. Jones enjoyed an even bigger hit with 1999's Reload, which featured duets with an array of contemporaries and those he influenced. Three years later, he worked with Wyclef Jean to produce Mr. Jones, and 2004 brought another collaboration, Tom Jones and Jools Holland. In 2008, he released another commercial and critical success, 24 Hours, which featured Jones' classic sound backed by contemporary productions from Future Cut, Nellee Hooper, and Betty Wright. His 2010 release, Praise & Blame, went in a completely different direction, filled with a stripped-down sound from producer Evan Johns and American Songbook material from the likes of Bob Dylan, John Lee Hooker, and Billy Joe Shaver, along with some traditional gospel and blues numbers. Johns would return to produce 2012's Spirit in the Room, but this time the material was more contemporary, with songs coming from Tom Waits, Paul Simon, Leonard Cohen, Paul McCartney, the Low Anthem, and others.